The U.S. government in October released the latest edition of its annual statistical yearbook on commercial fisheries, Fisheries of the United States 2015. The annual report is the latest in a series going back many decades, and presents statistics on fish and shellfish species landings, production of leading seafood products, production of aquaculture and industrial products, U.S. exports and imports, and national per-capita consumption of major fisheries products. In addition, the report contains information on global production, trade, and consumption.

Landings were up in volume, down in value…

Highlights of the report for 2015 include U.S. fishermen’s total landings in U.S. ports of all species (edible and industrial) of 9.7 billion pounds (4.4 million metric tonnes), valued at $5.2 billion. This was an increase in volume of 2.4 percent and a decrease in value of 4.5 percent over 2014, and a general continuation of stable trends seen in recent years for U.S. fisheries. Finfish made up 88 percent of total landings volume but only 46 percent of value. In addition, landings by U.S. fishermen in foreign ports (directly or via delivery to offshore processing ships; includes landings in Puerto Rico and other U.S. territories) totaled 548 million pounds (248,000 metric tonnes) valued at $284 million. 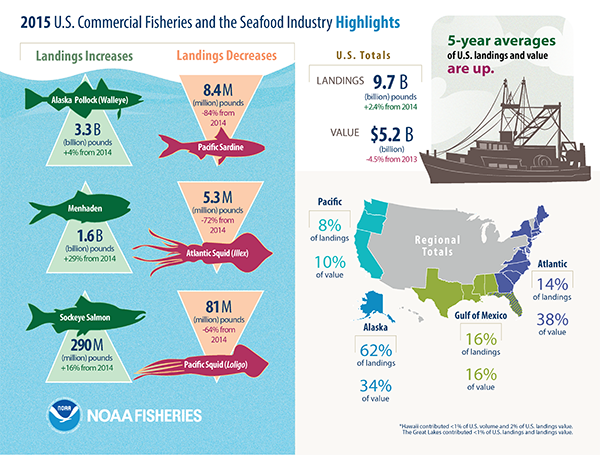 … while aquaculture production was down

In addition to commercial harvests and aquaculture production, a share of total U.S. supply is provided by recreational anglers. In 2015, an estimated 351 million fish were harvested during 61 million fishing trips. Of this total, an estimated 151 million fish (188 million pounds) were kept (or discarded dead) by anglers, the rest were released alive.

A vast array of seafood products comes from the U.S. industry 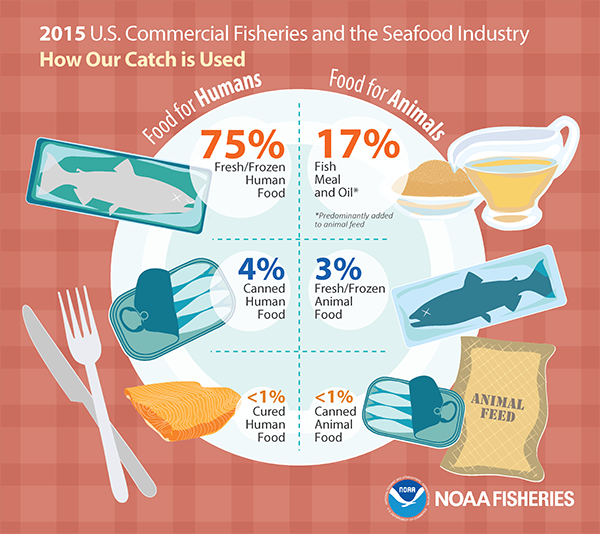 U.S. imports of edible fishery products totaled $18.8 billion, down by 7.1% from the previous year. Fresh and frozen products make up the vast majority of U.S. imports, and include tropical shrimp, salmon (including re-imports of foreign-processed U.S. landed fish), and tuna, among a wide array of other products. The leading sources of U.S. imports are Canada, China, India, Thailand, Indonesia, Vietnam, and Chile (75.1% of the total). The EU (mainly the UK, Spain and Germany) supplied 2.5% of total U.S. imports.

Americans consumed nearly 5 billion pounds of seafood in 2015, making the U.S. the second leading consumer nation behind China. On a per capita basis, consumers ate 15.5 pounds of fish and shellfish, up by 0.9 pounds from a year earlier. The most popular product is shrimp, followed by tuna and salmon.

Also included in the yearbook is information on sustainable fisheries and the state of U.S. resources. This yearbook and summary factsheets for the entire U.S. fisheries industry are available at: http://www.st.nmfs.noaa.gov/commercial-fisheries/fus/fus15/materials

Roger Corey, This email address is being protected from spambots. You need JavaScript enabled to view it.

More in this category: « Fighting for survival A paradise for anglers »
back to top 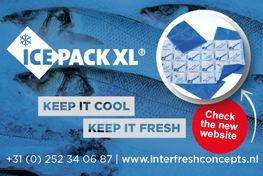